Do I Need Heat in Florida? Many find Florida a great place to live and why not? It has hundreds of miles of beautiful coastline and the cost of living is lower than many other places in the nation. A big part of the reason why so many people like it there is the weather. It stays sunny most of the year with temperatures ranging from extremely hot in the summer to much milder weather temps in the winter. This often brings up the question, do I need heat in Florida? After all, it’s warm most of the time so why would I ever even need a heater in my home?

Many of Florida’s average temperatures are around the 50 to 55-degree temperature range even at the coldest times of the year. Most people might consider going without heat in their Florida home if they knew the temperature would never go below 50 degrees. Those figures mean monthly temperatures can be very misleading though. That’s because they are made up of some seasonal temp days, some hotter than normal days and some days that are much cooler than the average temperature.

Some of those cooler days can be cold enough to bring freezing temperatures that threaten the local citrus harvest. It has to be pretty cold to do that. It’s the types of weather that no one wants to go through several days for the most part without having heat in their home.
The bottom line is nobody in Florida wants to take the chance of going without heat in their home. The only exception may be the extreme south near Key West. The rest of the state’s residents want to have a heating system that keeps them prepared for those sometimes-cooler winter nights and the occasional cold fronts that drop extremely far south during the winter months too.

There also is not much risk having a heating system included with any HVAC system. Most of them come with included heat anyways and it does not cost a person anything extra to have it if it’s not being used. Chances are if an HVAC system is costing someone money because they are running, that person is probably comfortably warm and very thankful they made the decision to have heat in their Florida home.

Hopefully, your question do I need heat in Florida has already been answered. The most important thing to remember though is hiring a dependable HVAC contractor to install and maintain your heating and AC system in your Florida home. If you live or own a business in and around Clermont, Apopka, Ocoee, and Windermere, Eggert Cooling and Heating is the company to call. You may reach us at 407-252-3785 to get a free estimate and to schedule your appointment! 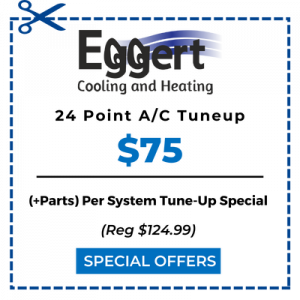